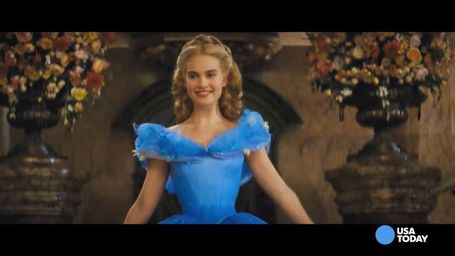 Even all dressed up as a princess, Lily James still could not dine like princesses.

The actress plays Cinderella’s part in the live-action remake of the tale. She found herself in a tight situation since the famous blue Cinderella ball dress includes a constricting corset. This corset called out eating.

The 25-year-old Brit reveals E! News that when the corset was on they did not have a break for lunch or even for a cup of tea. They had to eat on the move. In that case she would not be able to untie the corset.

If the actress made an attempt to eat solid food she would not look like princesses.

She told that eating food which does not digest in a proper way would result in burping all afternoon in Richard Madden’s face. The actress had soup which she could eat, but it would not get stuck.

The actress’ prayers were heard and the corseted dress was shown only in a small part of the remake which will be shown in the theatres starting from March 13. Though the corseted look of the waist has already turned into a fad, our Cinderela – who assured she is slim naturally – is not excited about it.

It was written in the interview that she considers that health, naturalness and confidence are much more important than thinking about being thin all the time. The actress does not see any sense in being a thin thing.