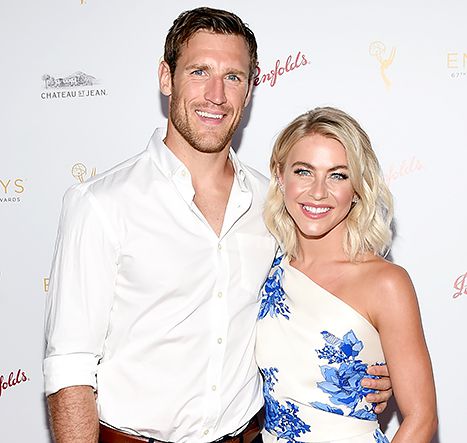 Engagement of Brooks Laich and Julianne Hough happened on September 5.

The 32-year-old hockey player uploaded a photo booth collage of black and white shots from their big day on Instagram and thanked everyone who made a very special memory for him and Julianne. Laick kisses Hough on the cheek. The 27-year-old Dancing with the Stars judge looks pretty happy. Her massive six carat ring designed by Lorraine Schwartz can be seen on the photos.

Last month Julianne revealed about her future husband’s proposal. She wrote on her website that it was sweet and fairy enchanting. Hough tells that Laich proposed her when they were at home. The couple was romantic and relaxed what is a perfect description for them. Julianne and her love were standing on the deck, listening to the songs they like most of all and watching the sunset over the lake. The star was not expecting a proposal at all. She considers it to be one of the moments with the most of meaning. The Safe Haven actress recollects that when Brooks kneeled, she was so surprised that “blacked out”.

Hough had a relationship with Ryan Seacrest earlier. Their relationship lasted for three years. The actress met Laich two years ago. She insists that he became her only one from the second they met.