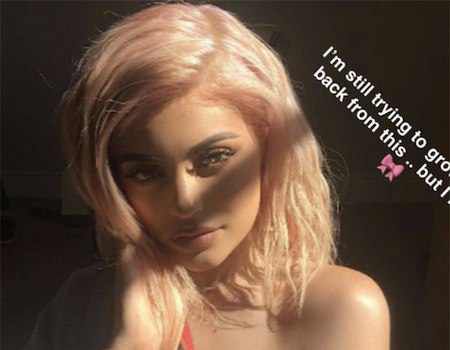 Kylie Jenner is getting pink! The star has not confirmed she is pregnant, but she goes on with making cryptic posts.

Some time earlier Jenner uploaded a snap on the Web boasting her baby pink nails and a strand of pink diamond butterflies wrapped around her fingers. The caption said “Shoot day”. The speculation about her being pregnant swirled after that.
Since that time the celebrity kept the nail shade and showcased her manicure once more in a Snapchat shot filled with pink graphic designs of flowers, hearts, 2 cartoon mice under a light bulb and a ribbon.

The star also uploaded a snap from a Kylie Cosmetics shoot. It displays a pink Christmas tree and a pink chair. Kylie also showed a row of purses with some pink ones among them. She called them “the babies”. Besides, the celebrity uploaded a throwback photo where she is with pink hair.