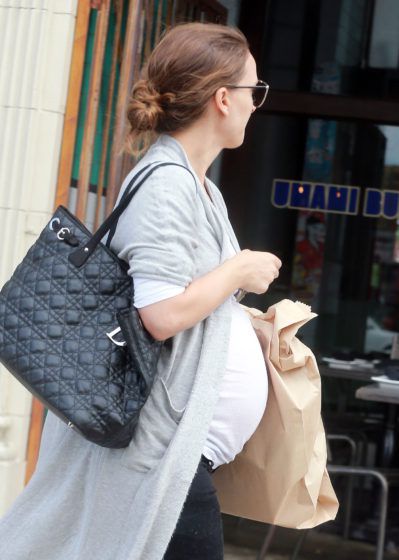 Natalie Portman will be a stunning mother!

The famous actress showed up for an afternoon shopping in LA this Monday. She also was seen going out for dinner.

The Oscar-winner wore a white T-shirt with a long gray cardigan. In such a way her baby bump was clearly seen. The star also had black sunglasses on and had a matching bag from Dior in her hands. The celebrity’s brown locks were tied into a casual bun.

The 35-year-old actress will become a mother for the 2nd time. She and Benjamin Millepied got married back in 2012. The couple already shares a 5-year-old son called Aleph.

The first bump debut was made at the Film Festival held in Venice. Then the star wore a white dress from Dior and promoted her French film Planetarium together with Lily-Rose Depp, her co-star.