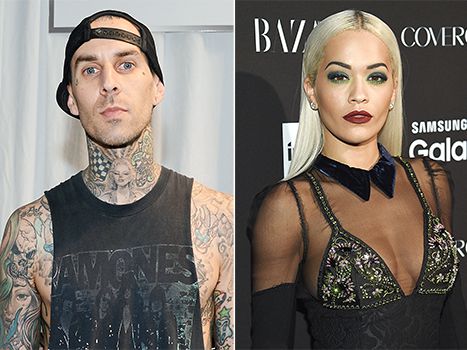 Travis Baker gushed about his girlfriend. Us Weekly exclusively confirmed that the drummer and Rita Ora are having a relationship.

The 39-year-old musician uploaded a cute picture on Instagram. It is from the couple’s attending the Power 106 All-Star Game in Los Angeles. The black and white photo has a caption that reads “me and my beautiful Rita Ora”.

The 24-year-old singer shared the snap and wrote “Nice to see you”.

Previously Ora was in relationships with Rob Kardashian and Calvin Harris. An insider shared with Us that the couple has been together every day since their first meeting. The Blink-182 drummer admires interesting women, therefore he is really into her.

The Fifty Shades of Grey actress is truly self-aware.  She revealed Mary Claire in July that she is scared of being alone and she is not embarrassed to admit it. Rita hoped that it was not a never-ending cycle. She said that love makes people feel crazy.

Baker and Shanna Moakler divorced in 2008. They have been married for four years. Shanna and Travis have got 11-year-old son Landon and 9-year-old daughter Alabama.