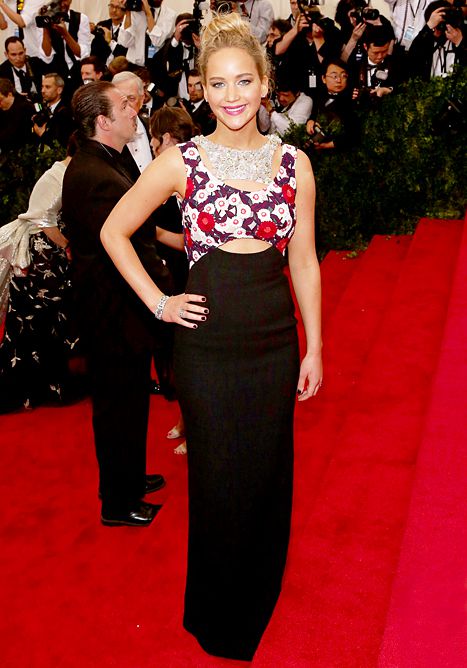 Jennifer Lawrence let her hair down and put on a cling silver dress after the 2015 Met Gala in New York City on May 4.

The 24-year-old actress was photographed while hurrying to Rihanna’s afterparty. She was in company with her friend Lorde at the Diamond Horseshoe in the Paramount Hotel. Lawrence was wearing a new outfit. She put on a curve-hugging piece after her formal red carpet outlook.

Some cleavage and skin could be seen in her second outfit. The Oscar-winner accessorized the dress with diamond pretty pretties. She wore a glittering choker and a longer necklace. The star also had two diamond-encrusted cuffs. She left her curling plume of hair loose in beachy waves. In such a way her features with girly pink make-up were accentuated.

The late-night outlook of the Silver Linings Playbook actress differed from her glamorous dress at Costume Institute Gala when she co-chaired it. The event was themed as 2015 China: Through the Looking Glass. The Hunger Games celebrity showed up in an embroidered glittering gown by Dior Haute Couture near the Metropolitan Museum of Art. You can find more pictures of Lawrence’s Met Gala outlook here. 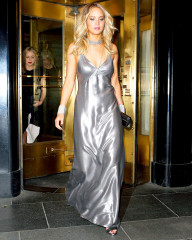