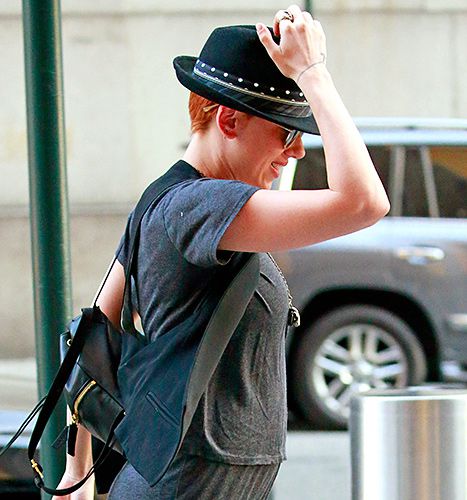 Scarlett Johansson was photographed on her way to the concert of U2. The event took place at the famous Madison Square Garden in New York City on July 22. The mother of 10-months-old Rose rocked a bold new hairstyle: she had red hair!

Even though the actress made an attempt to hide her hair under a fedora cap, her tresses still peeked out. In such a way, everybody could see that her naturally blonde hair was of the identical cinnamon colour which can be seen in Avengers. Scarlett performs superhero Natasha Romanoff (Black Widow).

It is not known at the moment if the 30-year-old star is going to trade in her big-screen bob instead of dishevelled stumps for next Marvel series instalments.

It is obvious that Scarlett did not simply bring her top hair game to the musical performance. The wife of Romain Dauriac sported fantastic rocker street style. Johansson wore a layered slate ensemble and a vest. She put on platform sandals from Robert Clergerie and had a mini-backpack.