Keira Knightley is terrified from the Thought of Having a Boy 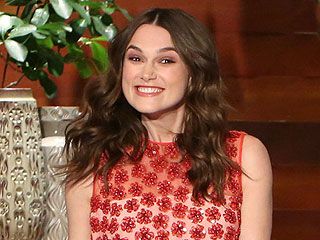 Keira Knightley is going to be mega-careful when changing her son’s diapers, if she has a boy.

The pregnant Oscar nominee shared on The Ellen DeGeneres Show on Tuesday that she has heard somebody telling about baby boys. It was said that in the process of changing nappies it is possible to get the wee right in your face. The actress is terrified with this news since she has neve heard about it.

Ellen DeGeneres agrees with Keira Knightley and says that this is not fun.

The 29-year-old actress imagines the process of changing a boy’s diapers and him peeing in his mother’s face. She presumes that baby boys can roll as well and goes on saying “so you will have to stop them at the same time when you are trying to find something else for stopping the pouring wee in your face.

The Imitation Game star does not know the sex of her future child yet. Ellen guesses that it will be a boy, but only because Keira has a 50/50 shot. The one thing about her is precise: her birth plan is not too complicated.

The actress shows her wit saying that there is no an option to keep the child in, but there is a plan to get it out. Therefore, she assumes that her plan is to get the baby out. Knightley guesses that there is something else to the plan, but she is unaware of those things. So, she is going to get it out.

Knightley could be seen with a constant partner on the ceremonies of the award season. It was her husband James Righton. It looks like he is also enjoying the perks of Keira’s pregnancy.

The actress tells about her husband. She says that he is having a terrific time, since she is eating for two and he is drinking for two. The star reveals that there is a lot of free champagne and since she cannot drink it now, her husband considers he has to.