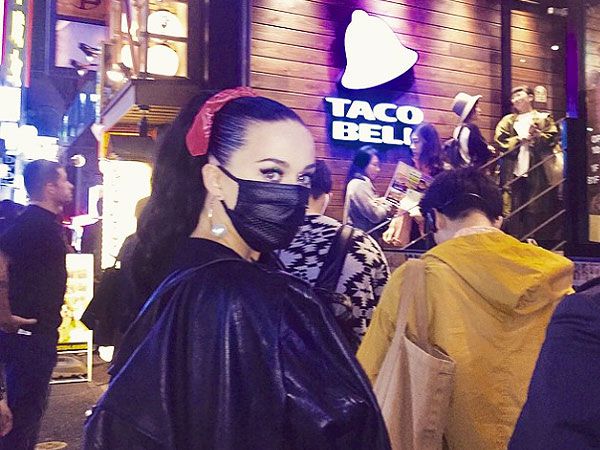 Katy Perry wore a black mask during her trip to Tokyo. She made a pit stop at the first Taco Bell in the city which started its work there last week.

The singer wrote on Instagram that one can take the girl out of the U.S., but it is impossible to take the Taco Bell out of the girl. She also noted a long wait for the grub. It lasted nearly an hour! Though, it is obviously a worthy kind of spending an evening to Perry.

The new Taco Bell place has been attracting enormous crowds since it started the work. Actually, hundreds of people were waiting before the doors on the day of Taco Bell’s opening at 10 a.m. Believe it or not, seven people even camped out overnight!

Even though the location in Tokyo has the same logo, the cuisine is tailored specially for the Japanese customers. There are Asian-inspired dishes, such as shrimp-and-avocado burrito and taco rice. Though, the American classics are still present on the menu, for example, the Crunchwrap Supreme.

As we can see, one of Perry’s life mottos is “it does not matter where you are, there always must be room for tacos”.