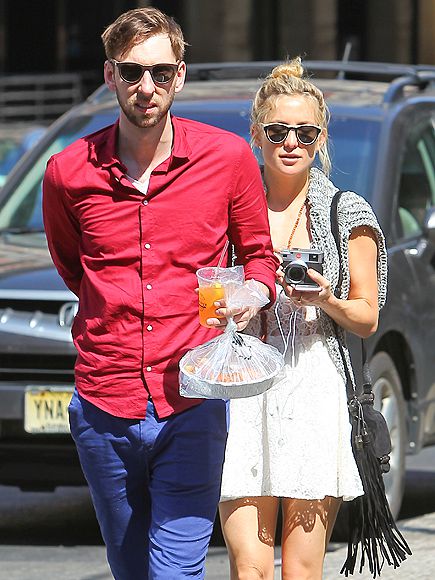 Kate Hudson was spied at the Bubby’s restaurant in NYC's Tribeca neighbourhood this Sunday. Get ready, she was spied not alone! The star visited it with Avatar star Joel David Moore. Numerous rumours about a possible romance have appeared after that.

The 36-year-old star wore a white sundress and held a Leica camera. Hudson walked too close behind Moore, 37, during their enjoyable sunny afternoon. A close to Hudson source assures that they are just friends and nothing more.

There were rumours that Hudson is dating Derek Hough, Dancing With the Stars celebrity. Though, the actress has not been officially linked to none after her split from Matthew Bellamy last December.

By the way, a lot of celebrities should learn from Hudson and Bellamy. They have maintained the most friendly ex relationship in Hollywood.

After ending their engagement, the Muse frontman wrote on Twitter that both of them were happy and their split was for the best. Moreover, they even had some good time in Aspen this winter.

Hudson and Bellamy are still working hard together since they have a wine company. It is called Hudson Bellamy Wines. Hudson shares with Wine Enthusiast that they will remain a family for the rest of their lives. She is sure that it will be so, since they have a beautiful 3-year-old Bingham and they love making wine.