At her age of 49, Kyra Sedgwick Looks Stunningly in Tight Dress on the Red Carpet 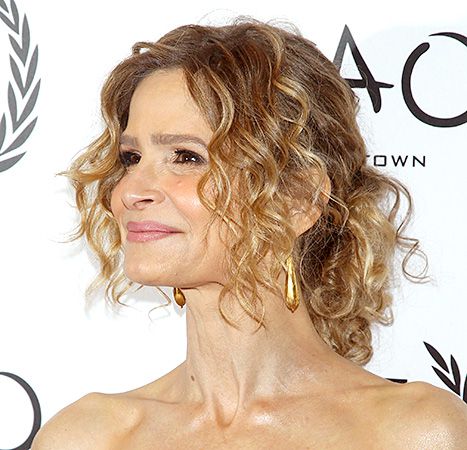 Only several months disengage Kyra Sedgwick from turning 50, but it is impossible to determine the number simply by looking at her, especially when she is on the red carpet! Her slim figure could be seen at TAO Downtown in New York City this Monday. The actress looked admirable at the 2014 Film Critics Circle in New York.

A 49-year-old actress spiffed out in a navy blue, off-the-shoulder dress. She also wore a sweetheart neckline fitting her outfit perfectly well. The outfit was chosen from the brand Safiyaa which is based in London. Her incredibly slim body was amplified with curves and in such a way created an hourglass look.

This gorgeous ensemble was completed by Sedgwick’s hairdo. Her blond curls were twisted into a romantic upsweep with several curls left loose. The actress also wore a Fred Leighton bracelet.

You may wonder what the secret of her unfading beauty is. It may be her loving husband by her side with whom they have been married for 25 years. Back in 2012 she told Redbook that getting on in years together is both scary and thrilling. Sedgwick confessed that when her husband comes into a room her heart misses a beat and that she is smitten with his appearance.