A Birthday Workout of Patrick and Arnold Schwarzenegger 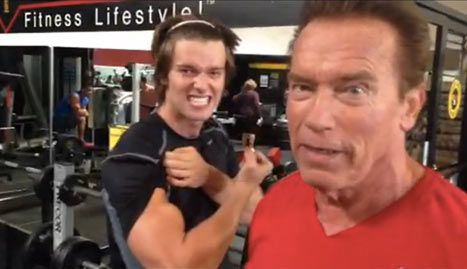 Good morning! The 22nd birthday of Patrick Schwarzenegger started a little bit strange. Arnold Schwarzenegger, his father, waked him up early in the morning in order to have a workout.

Patrick shares that the star woke him up at 7 a.m. The USC alum also uploaded a funny photo of himself flexing fiercely with 68-year-old Arnie.

The starry father uploaded a video on Instagram. Patrick’s photo is taken from the video. The actor proudly admits that through those 22 years he never expected his son to be not only smarter than he is, but also stronger. Schwarzenegger is amazed and congratulates his son.

Patrick also spent some time with Maria Shiver, his mother. There is a picture on his account where he is kissing the 59-year-old mother on the cheek. The picture’s caption reads that M-Dog had 22 banana pies for his birthday while waiting for Patrick when he turned back from the workout.

Maria and Arnold decided to part after 25 years they had lived together. That happened on May 9 four years ago. In a few days the news emerged that the actor is father to a love child with the long-time housekeeper of the couple.