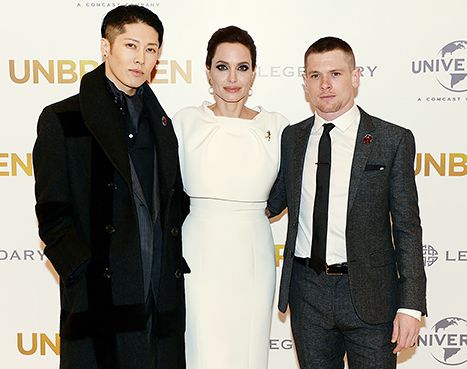 The drama, which is Jolie's sophomore directorial effort, debuted in 3,131 theaters. An adaptation of Laura Hillenbrand's non-fiction book of the same name, Unbroken brought in $15.59 million to take the No. 1 spot at the domestic box office.

Starring Jack O'Connell, Domhnall Gleeson, and Garrett Hedlund, among others, Unbroken tells the story of the late Louis Zamperini. Zamperini passed away this past November, but before his death, he worked with Jolie on adapting his fascinating life story for the big screen, including his time in the Olympics, achievements in the Air Force, brushes with death, and years spent as a prisoner of war in Japan.

Jolie's direction of the Coen brothers-penned script narrowly beat out Disney's Into the Woods. The star-studded fairy tale flick came in at a close second with $15.08 million from 2,440 theaters.

In third place was the final Hobbit film, The Hobbit: The Battle of the Five Armies, which made $13.14 million at 3,875 screens. One of the late Robin Williams' final projects took the No. 4 spot, as Night at the Museum: Secret of the Tomb charted $7.35 million from 3,914 theaters. Rounding out the top five was Mark Wahlberg's The Gambler, counting an estimated $5 million at 2,478 theaters.

Seth Rogen and James Franco's controversial comedy The Interview made an impact as well, landing the No. 15 spot on the chart. Showing at just 331 largely independent movie houses, the flick earned $1.04 million for an average of $3,142 per theater.

The Kim Jong-un assassination plot movie had a famously dramatic release as it was originally set for a wide distribution, then banned entirely, and finally picked up by small theaters and online distributors.

"The people have spoken!" Rogen tweeted after news broke that The Interview would see a limited release. "Freedom has prevailed! Sony didn't give up! The Interview will be shown at theaters willing to play it on Xmas day!"